”You have been emphasizing the software IP you bring to the table, maybe de-emphasizing a little bit of the slicon IP, but I am a Semiconductor Analyst and there was Supercomputing 2019 recently, and I think there was some expectations/hope that maybe we get a better understanding of your silicon roadmap to 7 nm, which we didn't do, when can we expect that? And then I guess, more importantly, how important is process technology to the overall solution that you bring to your customers?”

“We are always busy at work building our overall architectures whether that be our architectures as a whole, and it tends to serve many of our different markets, whether that be gaming, or professional visual, our overall data center. So fear not, we're working on our technology. Our innovations and our process technology has been exceptional over these last years. So stay tuned. We will always have something for you in the future, but we like to surprise everybody with our overall roadmaps and when things come out.

Now, the focus in terms of what is more important, the overall processing and the overall developmental software. We see a lot of people focused on - in PowerPoint - is trying to compete with our overall performance that we see in our overall processors. Our processors not only have been top notch, no matter what industry that they've been, there is still continuous improvement that we can do, both at the current node or in terms of the near future.

For every single one of our architectures, we continue to in the development cycle, choose the existing node or also look in terms of the future node to play out, which would be better for us to go-to-market. It's just the way we operate in terms of how we bring architectures to market. So that is a very important piece, a node change or not a node change on improving the overall processing power.

But the overall development of the software on top of this has allowed us both the ecosystem and the broad reach that we have both with the industries and the hyperscales. At the speed that we see AI advancing and acceleration advancing, they need that ability to change that overall, the development along the way. They need the ability to program, otherwise their investment is very, very hard for them to get a return on. The return on investment that you see from buying the overall GPUs without full end on platform is extremely helpful to them. -Colette Kress, CFO, NVIDIA” 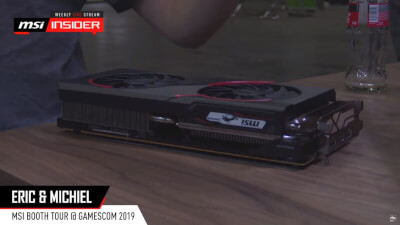