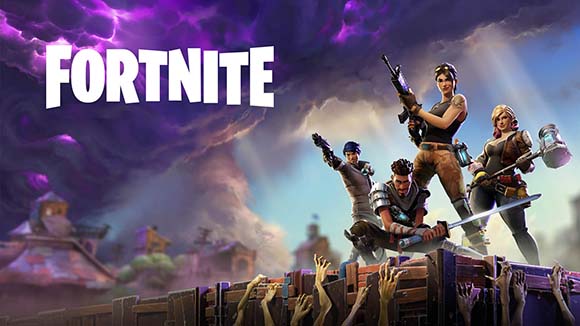 ”This patch improves smoothness of other players movement on the starting island by increasing network update rates, makes significant performance improvements when many players are on-screen by reducing the impact of character parts, optimizes Level-of-Detail (LOD) for buildings in Shifty Shafts and Flush Factory and hitches that occur when garbage collecting objects.

Shards of the comet have crashed! Many locations have been transformed by its impact. Discover all new points of interest, or find your favorite landing spot changed.

HOP ROCKS
The comet has left a scar on the island… Visit the crater and you’ll find glowing rocks all around.

Consume them and lift off with low gravity!

Input settings are now filtered based on game mode.
They’ve also been grouped by category (Combat, Building, Editing, etc.) to make it easier to search through them.

Added icons for the tabs at the top of the Settings screen.
Added “Ignore Gamepad Input” option to the Accessibility settings tab.
This setting can be helpful to players who use external programs to remap their controller input and need the game to ignore the controller input.

Wanting to track the top community issues? Head over to our Fortnite | Community Issues Trello board here.
Tracking for the Self Refund issue can be found here.

Structures on the starting island can now be destroyed. Not the Battle Bus, though.
Headshots are now prioritized when other body parts are in the way.
Incoming headshots (from above or straight on) will no longer be blocked by your character’s other body parts.

For example, a shot that hits your target’s hand will be able to penetrate through and hit their head if your aim was on point. You’ll be credited headshot damage instead of normal damage.
Headshots from below that are blocked by a body part (legs, torso, hands, shoulders, arms) will do normal damage, except for impacts very close to your character’s head.
This change affects all weapons, except for the Rocket Launcher and Grenade Launcher.

Slightly reduced the hitbox size of player hands.
Damage numbers are now visible when spectating a player.
Knocking a player off the island will award elimination credit like normal fall damage.
Fall distance is now shown in the elimination feed when a player is forced to fall by an opponent.
On the starting island, you can now see other players (and player-created structures) about three times further away than before.

You are no longer limited to just the 6 slots on your emote wheel for Sprays and Emotes and can now use any of the ones you own in a match!

The Locker slots act as a page of presets, but you can cycle through to any emotes marked as a favorite and then all emotes, sorted by type (PS4: L1/R1; XB1: LB/RB; PC:Mouse Wheel; Mobile: Buttons added next to radial menu).
Added new “Locker Emote Slot” button bindings, which allow you to immediately trigger any of your 6 Emote or Spray presets.
While Auto Run is active, an icon is now displayed.
Improved the look and feel of the Game options tab.
Slightly decreased the size of the arrow over players heads when they are close to you.
The fourth and fifth weapon slots will now default to keys 5 and 6 instead of Z and X when using the “Reset to Defaults” option.
The 4:3 aspect ratio is now supported.
Bug Fixes

The Crossbow has been vaulted.
Rocket Launcher aim reticle is now a fixed size regardless of player movement.
Hit markers are now displayed when looking through a scope.
Increased pickaxe damage against Supply Llamas, now dealing 50 damage per hit.

Fixed an issue where a weapon could have no ammo when dropping it immediately after picking it up.

Added an in-game player list to Replays.
Leaving a Replay will now take you back to the Replay browser.
Renaming Replays is now limited to 32 characters.
Increased the size of name column in Replay browser.
Bug Fixes

Fixed the alignment of the eliminations column in Replay browser.
Fixed an issue where Replay Browser list couldn’t be navigated with gamepad after cancelling renaming a replay.

Hunting Rifle mesh and animations have been updated.
Shotguns, Revolver, Hand Cannon, and Rocket Launcher have had their equip animations improved – they should now match the equip time.
Their equip timing remains the same.
The dust cloud that appears on player landings now shows for all players.
Storm wind now affects trees within the storm.

Fixed the Supply Llama not playing destruction effects when killed by projectiles.
Fixed an issue that caused Back Bling to display improperly after using a Launch Pad.
Players can now emote while rocket riding.

Adjusted timing on the equip sounds for all Shotguns. The cocking sound will now occur right before the weapon is able to fire.
Improved volume difference between soft and hard landing sounds.
Players falling from 1 or more stories will land with a louder audio cue.
Added unique impact sounds when hitting shrubs, bushes and cornstalks.

Fixed an issue that caused footstep audio to play when players were mid-air after jumping.
Fixed an issue where the Minigun equip sound would persist after quickly switching away from it.
The map marker sound no longer plays when removing a marker.

Improved smoothness of other players movement on the starting island by increasing network update rates.
Made significant performance improvements when many players are on-screen by reducing the impact of character parts.
Optimized hitches that occur when garbage collecting objects.
Fixed hitches that could happen in games where lots of building occurred.
Optimized Level-of-Detail (LOD) for buildings in Shifty Shafts and Flush Factory.
Optimized Input/Output (IO) performance on Consoles to reduce hitches and load times.

Fixed the view pop caused by the swiping inertia when lifting your finger off the screen.
Fixed bugs that were causing some erroneous misfires and input errors.